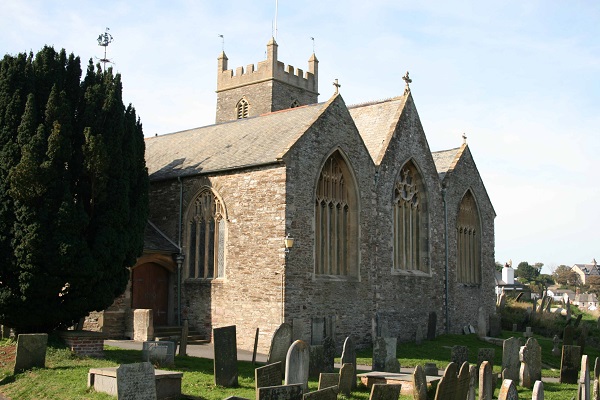 Holy Trinity is the ancient parish church of Ilfracombe which was considerably enlarged in the early C14. It is notable for the decorated ceiling in the central aisle complete with carved corbels surmounted by medieval angels and fine ceiling bosses. The stained glass includes a number of windows by Kempe.

Standing on the site of a Saxon church, the Norman church was enlarged to its present size in 1322, and the tower incorporated inside the building. Built of mostly random rubble slate walls, some rendered, with limestone dressings, the church has one of the finest wagon-roofs in the West Country dating from the 15th-century which is richly carved with bosses, angels, figures and five Green Men in a row.

At the East end of the nave above the former rood screen is a ceilure or Glory, with three bays enriched by cross-ribs and much decoration. The chancel ceiling is modern by George Fellowes Prynne in 1899.

The square baptismal font is Norman of about 1160 and is decorated with three rosettes and ears of wheat on each face with a scalloped underside. It was moved to its present position in 1861 during the 1861-1864 restoration by John Hayward.[1] The Elizabethan pulpit has arched columns and panels containing floral motifs. The lychgate and the vestry date from 1894 and are by Henry Wilson, the best pupil of J. D. Sedding.

The first recorded Rector was Oliver de Tracey in 1263, which is also the approximate date of the first stone building on the site. Little remains of this church, ordered to be enlarged in 1321 by Walter de Stapledon, Bishop of Exeter when the nave was lengthened and the aisles added. The tower is 14th-century and is the oldest part of the building: it is low, single stage and very plain with a pointed north door and a lancet window and a low unmoulded arch opening into the nave. It is located in a north transseptal position, frequent in early North Devon churches.

The north and south aisles are separated from the nave and chancel by eight bays of chamfered arches, four on each side on stunted octagonal piers; these are mid-to late 14th-century, while a piscina of the same date can be found in the chancel. The nave roof rests on stone corbels representing mythical beasts. The chapel in the north of the chancel is early 15th-century, while the aisle windows are from the Perpendicular Period. In the early 15th-century a North chapel was added. The stained glass is 19th-century and includes examples by Kempe (window in North aisle); Hardman (East window); Willement (south aisle East window) and Ballantyne (Stabb Memorial window).

Over recent years the graveyard had become overgrown but in 2014 a group of local volunteers started work. They began by clearing it completely of brambles, nettles and intrusive weeds and in the Spring of 2105 with the help of the community scattered 50 packets of wildflower seeds. The group will continue to keep the pathways clear and accessible and to encourage wildlife they have installed a hedgehog box, 6 bird boxes and as many plants and shrubs as they have been able to obtain as well as an Incredible Edible herb box and a community garden for people to share.