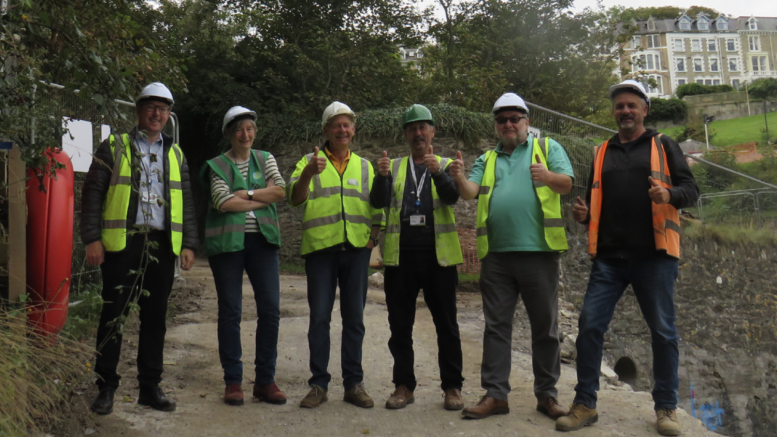 Ilfracombe is one step closer to having its own watersports centre, as the construction project at Larkstone is showing signs of progress. The site was visited recently by local district councillors and members of North Devon Council’s project team to check on progress of the development. Councillors Daniel Turton, Netti Pearson, Geoffrey Fowler, Jim Campbell, Paul Crabb and Malcolm Prowse gathered with council officers and project managers from Pearce Construction to inspect progress on site. Latest developments include foundations for the new seawall and the removal of the old canoe store. Pre-cast blocks for the sea wall were due to be installed in late October.

Lead Member for Economic Development and Strategic Planning Policy, Councillor Malcolm Prowse, says “The council hopes that this centre will bring more tourism, which in turn will bring more money and more jobs to the town. None of this would be possible without funding for the project which came from the Government’s Getting Building Fund after a bid by The Heart of the South West Local Enterprise Partnership and we are extremely grateful to them for their help in getting this project off the ground.”

Lead Member for the Environment at North Devon Council, Councillor Netti Pearson, says: “I was particularly keen to find out how much work is being done to mitigate the impact of the works on the environment. I was pleased to hear that a specialist consultant was brought in during the design stage to ensure that there was an environmental management plan in place.

Pearce Construction have built nooks and crannies into the sea wall to encourage marine plants to take hold and grow. They are also building crab houses and man made rockpools for sea creatures to live in. I was also very happy to find out that most of the materials that need to be removed will either be reused in the new build, or have been sent away for recycling, with very little going to landfill.”

In order to mitigate the impact of the building, areas around the site will be identified for bird nesting, bat boxes and natural homes for insects.

From FRIDAY 1st JULY, through to early September, a WEEKEND Minor Injuries Service will be provided from 10am to 6pm by two fully qualified private ambulance staff in the Tyrrell Hospital. This will be available for both walk-ins and patients referred through NHS 111. Monday to Friday Combe Coastal Practice may be able to […]
The post Ilfracombe Minor Injuries Service – Summer 2022 appeared first on Ilfracombe Town Council. Ilfracombe Town Council…

On 6 February, this year Her Majesty The Queen became the first British Monarch to celebrate a Platinum Jubilee, marking 70 years of service to the people of the United Kingdom, the Realms and the Commonwealth. Like elsewhere in the country communities across northern Devon have been busy organising events to celebrate this amazing […]
The post Celebrate our Queen but keep it Green! appeared first on Ilfracombe Town Council. Ilfracombe Town Council…